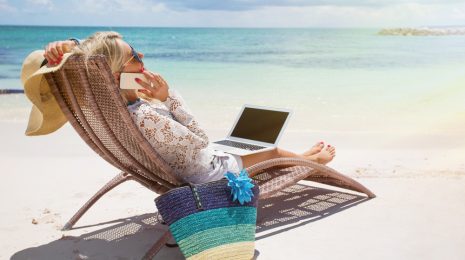 When you’re on a roll and things start falling into place as a direct result of your hard work, it can be very easy to get totally consumed by the moment and just want to keep going 24/7. This is something you especially see when a bunch of people are working on a start-up or even if you’re going it solo and do all the work yourself, but it’s important to have a plan to kick-back a bit, take some time off and re-energise.

Naturally in the early stages of working on a start-up you’ll want to get through as much of the initial work as you can as quickly as you can, but you can only burn the midnight oil so many times and you can only pull all-nighters so many times until it starts catching up to you.

Coders often like to refer to themselves as “wired-in,” which means that they’re singularly focussed on the task at hand and perhaps don’t even have time to look up from their computer screens to answer the phone or the doorbell. This is often the time during which you can be so much in the zone that you even forget to eat until you feel so hungry that you just can’t continue on an empty stomach anymore.

That “hitting-the-ground-running” and sprinting-out-the-starting-blocks spirit is great because it can help you achieve a lot within a very short space in time and you might even surprise yourself just how much work you manage to do running on this sort of inspiration.

See also  The Aim is to BE Rich Not Look It

Generally after one hits their early thirties however, this spirit does tend to die down and not in a bad way. At this age even the average businessperson has a lot more personal responsibilities in their lives and so they can’t fully immerse themselves in that pre Silicon Valley funding, garage start-up culture where they live on cereal and energy drinks.

Once your business is up and running and is operating stably, you need to realign things a bit and incorporate more time to yourself, away from the business so that you can recharge your batteries. It’s very important because it allows you to maintain some good aggregated momentum so that you can maintain some consistency to the quality you want to keep delivering into the future. An example of how this works and why it’s important to schedule good breaks in action is that of perhaps deciding to pull a couple of all-nighters back-to-back, something which I’ve done a bit too often for my own good. Sure enough, you get a lot of work done, but then once all that work is done your body automatically goes into holiday mode and in a sense forces you to take a break by shutting down and manifesting the type of fatigue which you just cannot get away from. Regular, short breaks work much better than the occasional long break after working long and hard, which is why full-time employees have two days out of every week to get away from the office, get some rest, re-charge and re-energise.

See also  When is the Best Time to Refinance Your Mortgage?