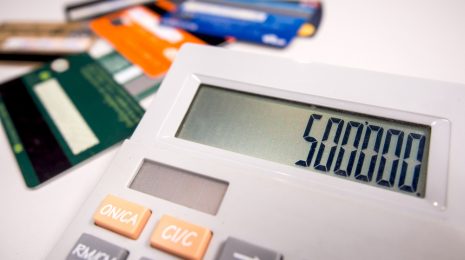 A survey has unveiled the chilling economic realities for Britons today. It showed that nearly half of us feel that we are not able to cope on our current income levels. The survey was conducted by the consumer group ‘Which?’ and it makes for very alarming reading. The findings also revealed that a scary one-in-five people have gone into debt just to buy household essentials, including food.

These statistics are a chilling reminder of how easy it is to get into serious debt problems. With prices of food, fuel and other daily goods rising at a faster rate than the average wage, most people are left with no margin for even the most modest spending.

The survey also looked into the general spending habits of 2094 British people. They were questioned about their current financial situation and revealed the tricks that get them through until their next pay day. The survey showed that more and more people are actively hunting for bargains, avoiding going out socialising, taking fewer holidays and switching energy suppliers. Crucially, they are also taking out less credit too, another sign of a nation struggling with recession.

The internet is a popular tool for saving money; 37 percent of those questioned said that they look for the best deals online rather than on the high street.

If you think these sort of problems can only affect those on the lowest incomes, then think again. Nearly a quarter of people with a household income between £37,000 and £70,000 thought that they were struggling to cope with their finances.

See also  The debt problem - how much do you owe? Richard Lloyd, Which? executive director was concerned about what these figures show us: ‘Our research shows that over half of UK consumers are not coping on their current incomes. A quarter of the people we spoke to said that they had been forced to use savings to buy food or other daily essentials. Worryingly one in five people told us that they had gone into debt to buy these things.”

Millions use credit cards to live on

Statistics like this have also been backed up by research conducted by the Post Office Consumer Credit Report that shows just how big our national debt problem is becoming. Last year, the Post Office found that more than 11.5 million people were left relying on credit cards for everyday living during January. Although January is traditionally a tough month for our finances, the fact that 43 percent of credit card holders used their cards to pay for groceries is worrying.

The same report said that around a third of credit card users depended on this line of credit every single month, not just in January. Seven percent of credit card users estimate that they will still be paying for these humdrum, everyday items for at least three years. It is easy for a short term issue to turn into a long term debt problem. If you are unable to pay off significant chunks of your credit card bill, it will take years to pay off at minimum payment levels. This means that you could buy food, eat it later that day, yet you will still be paying for it in years to come.

If you feel that you are struggling to pay credit card bills or to keep your head above water, make sure that you contact debt experts immediately. The sooner you get help, the better it is. There are many places where you can find professional advice that can help with your debts