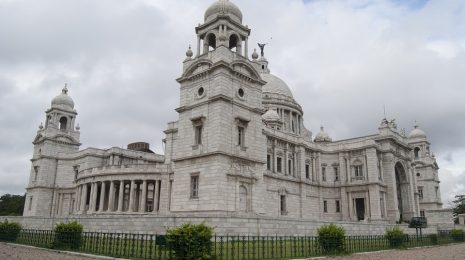 Kolkata is truly the City of Joy. Not just because of the old-world charm that it radiates, its wonderful places with visiting and friendly people and ambience, but also because of the for and culinary experience that it had in store for all the people who visit this city. The food is rich and vibrant and is a dream come true for any foodie from any part of the world. So, check out the Delhi to Kolkata flight booking options and head over this next vacation to savour this list of some of the most famous local dishes you should explore if you’re a true foodie.

Jhal Muri: One of the simplest but spiciest of them all, this lip-smacking snack or made of puffed rice, combined with an array of other items. The secondary ingredients include onions, chilli, jhuribhaja, peanuts, coriander leaves, a few drops of oil and a dash of lemon. They are served in small pouches of paper almost all over the city.

Kati Roll: This one is enough to get vegetarians and non-vegetarians alike, get their mouths salivating. They are made of flat bread, rolled up and stuffed with fillings that have no end to their components. They are downright delicious,and Kolkata is the proud birthplace of this note global cuisine. Some even have studded kebab meat in them, don’t miss out!

Phuchka: If you have been to Kolkata, but you haven’t had a few phuchkas, you are missing out on some serious local cuisine. Also called golgappas, almost everywhere else, this is a small hollow ball of crust, punctured to place inside out a delicious mix of mashed potatoes, spices, onions and chilies, and served in small plates after they have been dipped skillfully in sour water made from tamarinds.

Momo: You might find them elsewhere too, but once in Kolkata, you should not really miss out on them, as they are quite an important part of Street food here. These local dumplings are actually stuffing’s of vegetables, chicken, pork or fish, and have been steamed or fried. They can be a part of any wholesome meal or eaten as a snack.

ChhanarJilipi: One of India’s most famous sweets is the jalebi. Suffice it to say that an equally, or perhaps even more delicious, and local variant of this sweet is the Chhanarjilipi. This roughly translates to a jalebi made from cottage cheese. It is sugary, its sweet, it’s dripping with syrup, and can be found in almost any sweet shop or street food stall.

Telebhaja: This is roughly what people call pakoras, in other parts of the country, but not exactly so. They are deep fried snacks, a classic for anitem for people of Kolkata. They are consumed almost everyday in the evening or morning snacks and are a delicacy. They mainly consist of vegetable mixes, or potatoes or meat, speed in a batter and for to get a golden brown delicious snack.

Ghugni: A curry like amixture of dried peas, spices, onions and topped with coriander leaves and chillies, is a hot pick in Kolkata. This is called ghugni or ghugnichaat. They are served in little bowls, and hence are convenient to have on the go, and it’s simply splendid.

Kolkata boasts of all you can think of – from five-star restaurants with dazzling for items that will make your eyes pop out, to the dynamic street food options that will make you salivate from a mile away. So, no more waiting; look up Delhi to Kolkata flight bookingoptions and head over here for your next heavenly culinary adventure.

See also  Benefits of Having a Marketing Consultant as Your Partner