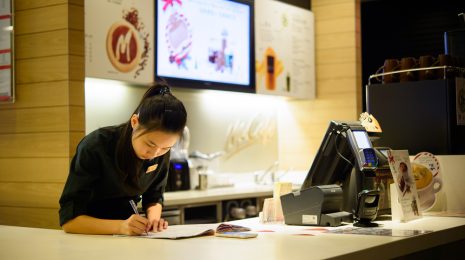 Sometimes the difference between resounding success and spectacular failure in the world of business is the attitude and that’s the truth, even though I can hear your eyes rolling around in your sockets as you begin to think about dismissing this post as another one of those motivational mumbo-jumbo messages. I’m only speaking from experience here and will get into a real example of a personal experience I had which made me realise that sometimes pride must be put aside if you want to make the sales, especially if it’s empty pride. Actually, any kind of pride needs to be put aside…

So while I was still working at McDonald’s I could feel it in my bones every single day that that environment was not where I was meant to be — it was not my destiny. I always say that I appreciate all the lessons learned from working that job and in all fairness I think my exposure to that environment contributed greatly to the successful businessman I am today, but it all started with questioning the established processes. For a world-renowned fast food chain such as the likes of McDonald’s, basically the working environment is an established one which the franchise understandably tries to maintain throughout, which is why you can walk into any McDonald’s around the world and would generally find the same type of service and food that generally tastes the same all around. If you bought a Big Mac in South Africa for example it would probably taste the same as the one you buy in the United States. So dare I say my entrepreneurial spirit and inner-problem solver suffered a great deal because I wasn’t even allowed to suggest a better supplier for the friggin’ tomatoes used in the burgers — a supplier which mind you was a stone’s throw away from the franchise I was working in and a supplier which produced premium grade tomatoes at a cheaper price than those found in the markets.

So, whenever I had done the breakfast shift and knocked-off early, I went on a door-to-door sales endeavour in which we were demonstrating the power of a new all-purpose cleaner (it really worked wonders) and trying to close the sale right then and there. I was rather shocked to find one day that one of the guys with whom I was selling managed to close about four sales on doors which I had already knocked on myself without success, so I decided to tag along one day to see just how he did it.

It turns out he detaches himself from what some of us would call pride and wants nothing more than to make a sale, so with his nothing-to-lose attitude he would walk up to the doorway, take a picture of a stain with his phone, start cleaning the stain and then ring the doorbell for the homeowner to come out and find that that stubborn stain is gone.

How can you not buy after seeing that and as the sales man, what have you really got to lose?